Driving along a rural highway in northern Minnesota shortly after the sun rose, I noticed a beautiful dog standing on the shoulder, looking somewhat confused. He did not seem in distress, but he was nowhere near a driveway or somewhere that one would consider his home.

Despite a scheduled meeting, I could not just drive by. I promised myself, as I slowed down and pulled on to the shoulder of the 2-lane highway, that if the dog ran or appeared scared when I got out of the car, I would not risk having him run into traffic and would get back in the car and continue on my way. But, as I stopped the car, the dog looked hopeful and his ears perked up. I exited the car and stood on the side closest to the ditch, about 20 feet away from the dog, and softly spoke to him: “Are you lost, boy? Do you want some help?” He started trotting toward me and I slowly opened the passenger door.

I was grateful that he required no significant encouragement to hop on in, where the seat cover was already in place for the four-legged companions I often travel with! I recalled a diner in the small town about a half-mile back, and drove there, as the husky quietly settled into the back seat.

I showed his photo to the waitress and table of guests at the diner. They did not recognize him, but the waitress (or perhaps owner, as well) was kind and generous, and did not skip a beat when I asked if there was any way the dog could possibly stay at the diner while I continued on to my meeting.  She called her son who lived nearby, and he found a tie-out for the dog, to secure him behind the diner. I posted a “found dog” message with the photo to a Facebook page for missing pets in the region, one of many such sites that are tireless in reuniting lost pets with their families.

I arrived a little late for my lunch meeting, after a morning of driving, and periodically checked the Facebook page for updates. Mid-afternoon, as I was ready to hit the road again, I saw the news I was hoping to see — “HOME SAFE!!”  Mutual friends saw the photo and let his owner know — they had been searching for him after his battery died on his electric fence collar, and he safely made it home again!

Gratitude for strangers who help others in need. The world would be a much better place if we all took a moment to be kind to each other, and to extend that reach of kindness to all living creatures who cross our paths. 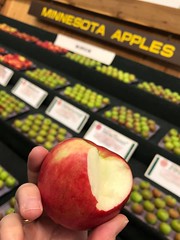