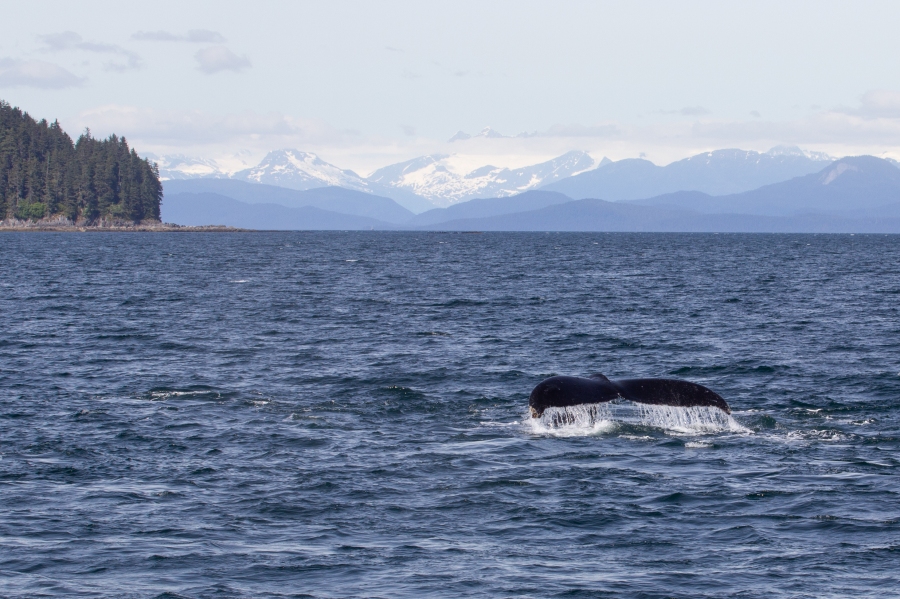 This is the sixth of the “Week-Long Alaskan Dream” post series.

While COVID-19 has thrown 2020 a curve ball, and continues to disrupt in ways that are so difficult for so many, it seemed superficial to pick up where I left off to finish this blog series from our Alaska trip a year (seems like a lifetime …) ago. As I finished editing my photos during these months of more limited activity, it has been a welcome escape and reminder of the wonders of this world that are worth fighting for …. like the wonder of whales.

Wednesday was our fourth full day on the Alaskan Dream’s Misty Fjord, and was scheduled to be a long travel day, navigating Chatham Strait to position us just outside the entrance of Glacier Bay National Park.

Rounding the corner of a peninsula and looking back, we were treated to a grand scene: Point Retreat Lighthouse stood marking the promontory with massive Herbert Glacier dominating the background. The prominence of the glacier in the background despite the distance was a testament to its enormity. The details of the bluish ice field were hazy, creating a dreamlike quality to the scene, the lighthouse starkly contrasting with the clarity of its detail.

Humpbacks had been seen the day before in Freshwater Bay, so our Captain took a slight detour from our planned route to check it out …. what a worthwhile diversion it turned out to be!

As we entered the bay, in the distance we could see multiple spouts and a flurry of activity before the classic arching backs and flipping tails followed.

We clustered on the bow of our small vessel, scanning the open waters around us. The telltale churning circle appeared before a chorus of mouths and snouts emerged, with flailing pectorals showing flashes of white joining the feeding frenzy. The bubble net was created by the whales below, which trapped the herring the whales then swooped up to consume. The humpbacks milled about after the initial circular effort, water spouts following one after the other, undulating dorsal fins side by side, and the seemingly synchronized dive together — 3, 4, 5 at a time, tails slowly turning over and sinking to the water below, signaling the end of another feeding session.

We watched this sequence play out in full several times. Our gasps of awestruck wonder each time the stages of the instinctual dance began anew. Our small group soaked in the spectacle in silence … creating space for the sounds of the whales from below and along the surface to reach us, like an otherwordly exchange of voices.

At one point, the last of the whales’ tails gracefully disappeared, and most of us had set aside cameras and binoculars while we replayed the scene in conversation.

Suddenly, a single whale broke the surface in a breathtaking arch, breaching the water almost completely in a majestic manner, before it landed dramatically, displacing an enormous amount of water in one fell swoop. The bay’s surface reflected the disturbance for an extended time before returning to its even ripples.

Our unplanned hours in Freshwater Bay meant spending most of the rest of the day traveling to position for the remaining two days of our itinerary. Along the way we noticed the periodic group of Dall’s porpoises playing on the waves, or an isolated sea otter or sea lion traveling on its own journey.

Evening brought us to Flynn Cove, and we anchored for the night. The sun was just beginning its descent as kayaks were brought down from the top of the boat. The waters were calm and we pushed off in pairs to explore the cove.

The area was known to be popular with bears, but the unsettling growl that echoed across the water, in the way that only sounds can in the quiet of evening, was not a bear — instead it came from one of two elephant seals who were surprised by a couple of the kayaks. Our naturalist scared them off and the rest of the evening paddle was uneventful.

Before returning to the boat for the night, most of us beached our kayaks and took a short walk across the point from Flynn Cove to where we could see Icy Strait, just as the sky shifted from gold to pinks and blues, signaling that twilight had begun.

On the beach, faint bear tracks were seen, mixed with signs of birds and smaller animals. While I did not hear it, several in our group heard the low grumble which was an almost indescribable guttural sound that was unmistakably bear. It was our signal to leave.

With a short paddle back to the boat, our day of wonder came to an end.

Previous posts in the series:

13 thoughts on “The Wonder of Whales”