Steven Spielberg did not need to use special effects to inflate the size of Devils Tower in the film that made this National Monument famous:  Close Encounters of the Third Kind.  One best appreciates the significant size (not to mention geologic interest) of this eastern Wyoming icon by walking the undemanding 1.3 mile base trail surrounding the column.  Particularly in contrast to the relatively flat landscape surrounding it, Devils Tower is big!

Many legends tell the story of how Devils Tower came into being.  One of my favorites is that of the Kiowa Indians, as retold on the National Park Service website:

Before the Kiowa came south they were camped on a stream in the far north where there were a great many bears, many of them. One day, seven little girls were playing at a distance from the village and were chased by some bears. The girls ran toward the village and the bears were just about to catch them when the girls jumped on a low rock, about three feet high. One of the girls prayed to the rock, “Rock take pity on us, rock save us!” The rock heard them and began to grow upwards, pushing the girls higher and higher. When the bears jumped to reach the girls, they scratched the rock, broke their claws, and fell on the ground.
The rock rose higher and higher, the bears still jumped at the girls until they were pushed up into the sky, where they now are, seven little stars in a group (The Pleiades). In the winter, in the middle of the night, the seven stars are right over this high rock. When the people came to look, they found the bears’ claws, turned to stone, all around the base.No Kiowa living has ever seen this rock, but the old men have told about it – it is very far north where the Kiowa used to live. It is a single rock with scratched sides, the marks of the bears’ claws are there yet, rising straight up, very high. There is no other like it in the whole country, there are no trees on it, only grass on top. The Kiowa call this rock “Tso-aa”, a tree rock, possibly because it grew tall like a tree.
Told by I-See-Many-Camp-Fire-Places, Kiowa soldier at Fort Sill, Oklahoma, 1897.

The Kiowa story and other stories passed on through the Plains Indians can be found by clicking on this link from the National Park Service website. 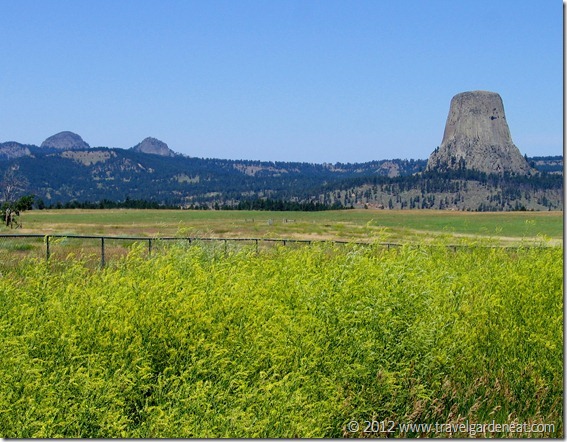 Devils Tower is a worthwhile stop, even if only for a short hike and stop at the visitor center as you road trip across Wyoming, or perhaps as a day trip while visiting the Black Hills in western South Dakota.  If you have time for an overnight or evening visit, though, the sunsets and sunrises can be spectacular photo opportunities.