Beautiful Glensheen mansion in Duluth, Minnesota hosted its second annual “Jack O’Lantern Spooktacular” last weekend.  The evenings were classic bone-chilling, northern Minnesota fall weather, but they were clear with an almost-full moon for some of the nights of the event, which added to the spooky fun ambience! 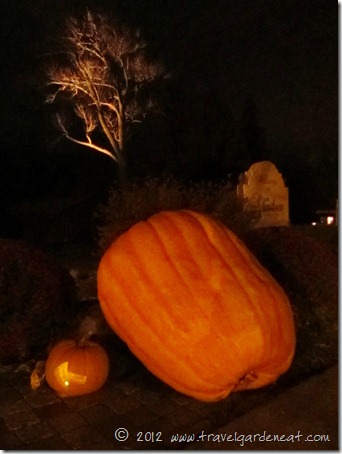 As you enter the grounds, one of the majestic old trees is lit from below, appearing to stretch its branch fingers to the moon.

You are guided by lit pumpkins into the old carriage house, which would be the starting point of your tour if you ever have the chance to take a detailed look at this magnificent property on the shores of Lake Superior.  As you exit the carriage house, you walk along the winding path, and can see Duluth’s aerial lift bridge on Canal Park in the distance.

Walking toward the house, a magical sight meets you as you turn to look at Glensheen’s gardens and fountain (or at least turn to look at where they would be found in daylight).  My camera was inadequate in capturing the awesome vision! 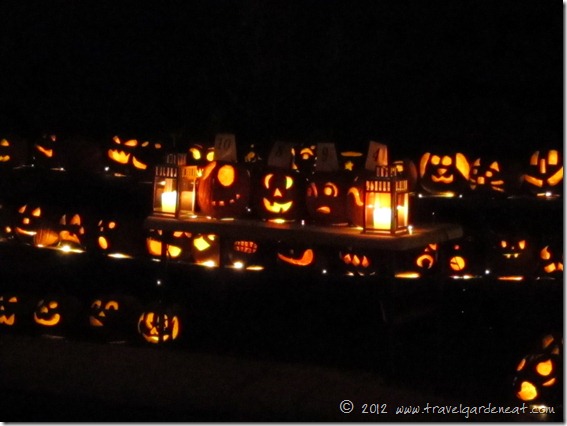 The self-guided pumpkin-lit path leads you briefly through the house, where you have the opportunity to vote on your favorite carved pumpkin.  Then, you walk through the kitchen, where a devilish young woman is pounding pumpkins, and the other pumpkins await their fate — notice the worried and fright-filled expressions of the pumpkin gallery!

During the evening’s festivities, you have three opportunities to watch a fire performer (Dave Carlson of Malleable Reality, according to the Spooktacular Facebook page).  You can enjoy a s’more and warm your hands next to the fire pits.

You still have time to participate in Ailsa’s Weekly Travel Theme at Where’s My Backpack?  This week’s theme is “Spooky” which may be interpreted in a variety of ways — click here for more ideas on how to respond to the theme, and to see others’ responses in the comments and pingbacks.

Happy Halloween to all!