Breaking free from cabin fever seems to have been the theme this month with some of my fellow northern bloggers.  Earlier this month, Heather from “Our Adventures Up North” expressed the frustration of these often gray winter days, in this post, while Kathy of “Lake Superior Spirit” shared deep-winter thoughts from her side of the Big Lake, here, along with photos of the impressive ice fields resulting from the extended cold temperatures.

Saturday was a window of opportunity of sunshine and warmer temps for many of us craving them, and I was not alone in getting outside to soak up the much-needed Vitamin D.  Heather also enjoyed the beauty of the frozen outdoors on Saturday, from the shores of a different Great Lake, Lake Michigan (enjoy her writing and photos in her post, “A Day in the Sun.”)

Split Rock Lighthouse State Park houses both the historic site with the Lighthouse and a lovely set of trails and scenic campsites year-round.  Ellingson Island is located a short distance from the shoreline trail, and only seasonally accessible to foot travel.  In all the years of living in northern Minnesota and exploring Split Rock’s park and trails, I had never wandered onto the island itself.  While I noted the footprints crossing the frozen bay to the island, I initially took the conservative path where the points of land were closest to each other (as seen in the last photo).

Rounding the southern side of the island, the vast frozen expanse of Lake Superior stretched seemingly forever.

I shared with you a photo of my handsome outdoor companion in this week’s response to the Daily Post’s photo challenge, “Rule of Thirds.” While clambering over the snow- and ice-covered rocky shoreline on the eastern side of the island, we were provided an elevated view of the frozen bay extending to the iconic Lighthouse. Animal and human tracks criss-crossed the ice, creeping much closer to open water than I dared.

The icicles sparkled in the changing light, as the sun moved across the sky.

Corbin and I had planned to make a short stop at Split Rock before driving further up the North Shore to Temperance River or Tettegouche State Park, but we instead found ourselves enjoying a leisurely hike and simply appreciating the frozen beauty surrounding us.

Soon, the sky began to glow a soft pink and purple with the sunset, and the forecasted return of bitter cold could already be felt in the air again. 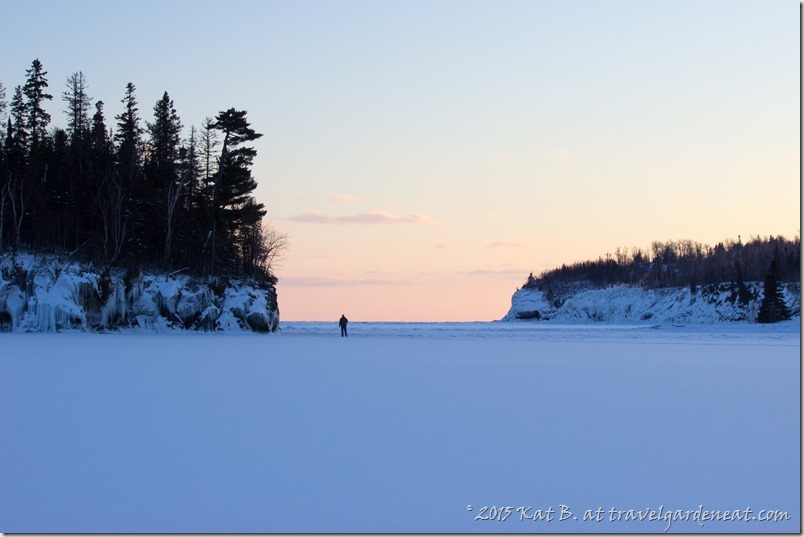 “She felt an enveloping happiness to be alive, a joy made stronger by the certainty that someday it would all come to an end. Afterward she felt a little foolish, and never spoke to anyone about it. Now, however, she knows she wasn’t being foolish. She realizes that for no particular reason she stumbled into the core of what it is to be human. It’s a rare gift to understand that your life is wondrous, and that it won’t last forever. ” ~ Steven Galloway, The Cellist of Sarajevo